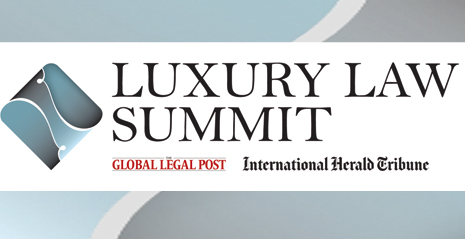 Social responsibility was one of the overarching themes at last week’s Luxury Law Summit. The inaugural event organised by The International Herald Tribune and The Global Legal Post was attended by legal teams from some of the luxury industry’s most eminent brands and The Future of Luxury went along to find out more about an often overlooked side of the industry.

Billed as a forum to discuss the key legal issues affecting the €200 billion+ global luxury market the event’s timing couldn’t be better. As one of the few areas to have remained optimistically buoyant during the recent economic downturn, the luxury industry now faces the combined challenges of expansion into new territories as well as that of retaining brand control in an increasingly digitally-driven world.

Counterfeits and the Challenges Faced by Luxury Brands

The risk that counterfeit goods pose to the luxury industry, although not a new issue, is one that has become the centre of increasing focus given the myriad of opportunities that social and other digital platforms have afforded its spread. Needless to say, Intellectual Property was a hotly discussed topic.

The day kicked off with Laudomia Pucci, Deputy Chairman and Image Director of Pucci, getting right to the nub of the counterfeit question by holding up two Pucci print scarves – only one of which was authentic.

Pucci maintained that the critical question at the heart of the luxury industry today was ‘are brands doing enough to educate consumers about the human cost of the counterfeit industry?’ Although the recent tragic events in Bangladesh revealed the unpleasant consequences behind the trend for ‘Fast Fashion’, the disaster also highlighted the unsavoury reality behind the creation of cheap, and consequently often counterfeit, goods. Stressing that education was key not just for consumers, Pucci also made the point that it was a question to be brought to the fore within academic institutions around the world so that the next generation of fashion industry professionals might be better equipped to deal with the issue.

This was a message echoed by Barbara Kolsun, General Counsel for Stuart Weitzman who reiterated the need for more education about the cost of ‘Fast Fashion’ and admitted that luxury brands are ‘haunted’ by counterfeiters.

The day continued with a selection of workshops including the Baker & Mckenzie chaired ‘The Digital Age: Building a brand experience and ‘phygital’ marketing’. Focusing on the ever more blurred lines between the physical and digital space (hence the term phygital) the workshop looked at the legal issues given rise to by the emergence of ‘big data’. Another topic under the spotlight was the ongoing legal review concerning the jurisdiction of where responsibility for a websites lies. Should a site be under the jurisdiction of the territory the server is located in or where the majority of the customers are based? Watch this space as the law on this subject is currently being amended.

The ‘Social Media and the Luxury Market’ roundtable chaired by Mackrell Turner Garret with contributions from Lee Gage General Counsel at Ben Sherman, provided some eye -opening, and at times eye-watering, examples of social media gone wrong as well as the clear benefits of implementing a robust, company-wide social media policy.

Counterfeiting is good for the luxury industry…

was the controversial title up for debate in the second half of the day.

Federica Zambelli, Brand Protection Manager of Moncler Group, Valérie Sonnier of Louis Vuitton and Laurence Morel – Chevillet of Bulgari spoke about some of the strategies being used to provide customers with reassurances of authenticity. Although for obvious reasons details of these anti- counterfeit mesasures couldn’t be detailed it was a revealing look at the extent to which brands are investing both financially and technologically in their efforts to protect their intellectual property.

Robin Gruber, Vice President, Global Brand Protection at Chanel reiterated the staggering extent of the problem by revealing Chanel alone has closed down 10,000 sites selling fake branded goods, their approach being to close down a site as soon as possible after its discovery.  Interestingly, Gruber also restated that Chanel won’t be venturing into ecommerce for the foreseeable future (apart from the already established sale of fragrance and beauty) as the brand still has doubts as to luxury’s compatibility with the democracy of the internet. Daniela Della Rosa, revealed that Gucci’s efforts to control their brand resulted in the closure of around 20 mirror sites per day.

Taking part in the debate too was Roberto Manriquez of Interpol who gave a fascinating behind the scenes insight into the processes used by counterfeiters in an attempt to replicate a brand’s particular ‘look’.

David Wall, Professor of Criminiology at Durham University and researcher and teacher in the fields of cybercrime and intellectual property, presented counterfeit according to a sliding scale measured by quality and intent to deceive and suggested, controversially, that some types of counterfeit goods may not be as damaging as others. Wall called for a more unified approach in the battle to protect intellectual property in the luxury market. With each brand investing substantial resources, as well as finances, to counteract the threat faced by the counterfeit industry Wall suggested that a synergistic, one for all approach may actually deliver more results than each brand fighting its own corner.

Also discussed during the debate was how the rise of 3D printing might impact the availability of fake goods in the future. As technology becomes cheaper and more widely available could it almost ‘redistribute’ the power to counterfeit to a wider audience?

In conclusion, the fight to protect brands’ intellectual property from the counterfeit world is incredible complex. It would seem that luxury counterfeit goods are the result of the ultimate paradox. As Prada CEO, Patrizio Bertelli, said in an interview last year ‘counterfeits, we’re happier to have them than not have them. Don’t you think it’s sad for a brand that no one wants to copy them?’

We’d love to hear your thoughts on the event if you attended, or if you didn’t have the opportunity to attend give us your take on some of the issues raised during the day via @futureofuxury