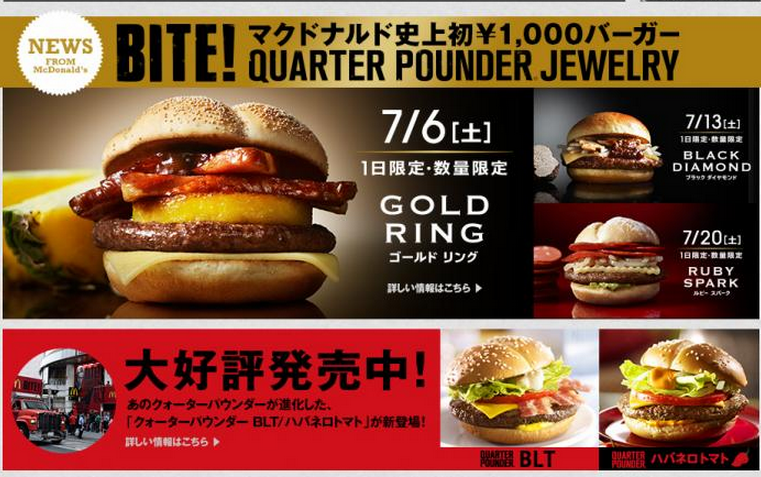 What do we think of as the main pillars of a luxury brand? Perhaps craftsmanship, exclusivity or the highest quality materials are just a few that might sprint to mind. Here at TFOL we’re always debating and refining what modern luxury translates as. And so when McDonald’s recently launched their Frappe TV commercial in the UK our ears immediately pricked up.

The TV commercial promoting the new Iced Frappe range suggests that, despite being a fast food chain, one can experience luxury at McDonald’s. To many, the mention of McDonald’s and luxury together seems like a surprising pairing and acts as an indicator that the perception of luxury is gradually shifting from what used to be the quality of the product towards the experiences one can enjoy through a brand.

Though a first for McDonald’s in the UK, it comes off the back of a recent campaign launch in Japan. The release of the “Quarter Pounder Jewellery Series” in Japan introduced a range of burgers selling at around $10 each featuring ‘high-end’ ingredients. This unexpected move, informed by the brand’s awareness of the Japanese obsession with luxury (an incredible 80% of the whole Japanese population own a Louis Vuitton product). The limited edition ‘Jewellery Series’ saw the traditional brown paper packaging scrapped and replaced by a minimal white and gold cardboard box inside a white bag held together by a golden ribbon. By making ‘luxury burgers’ and packaging them likewise, the fast food chain appealed directly to the tastes of the Japanese consumer.

With the great trend in luxury fast food in the UK with venues such as Bubbledogs and Meat Liquor, McDonald’s no doubt can see an opportunity to cash in. But it’s interesting to note that they are using a Frappe to introduce this idea to the UK. Perhaps that’s due to a less enthusiastic mindset to luxury products than there is in Japan, or just part of a longer term strategy to enter the market slowly? Either way, it’s an interesting move by the fast food giant and it will be interesting to see how competitors such as Subway and Burger King might respond.